I worked on this post card a few days, though, admittedly it is very simple.  I really like the texture I achieved.  I had pressed the postcard onto another sheet that had glass bead medium so there was a light skim of that on the surface.  I squeezed some white and black gesso onto the surface and spread it at angles with my palette knife.  I let that layer dry.  I came back to it and added a bt of yellow acrylic.  I didn’t like the effect so I hit it with a bunch of water and removed most of it.  I let it sit for another day or so.  Then I decided to apply some tissue paper to the surface.  I grabbed the yellow and put down a strip, followed by the green.  Then I finished with the small piece of yellow that actually looks like it is showing through but is on top.  The tissue paper is so thin that it was easy to get it to adhere to the glass beads easily.  I just used matte medium and a brush to work it into the surface.  It’s a bit dark but I’m happy.  I guess it’s another way to avoid my canvas – Emerging Cosmos – since I don’t know what to do next.  Tomorrow I will just dive in again!

I joined a postcard challenge being hosted by Art and Sole, here http://art-and-sole.blogspot.com/.  For details about the challenge and the inspiration behind it you can click the postcard challenge icon in the right margin.  The basic premise is that two strangers begin a postcard exchange.  Be sure to visit Art and Sole to check out the other wonderful postcards that are being created! 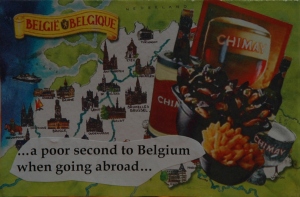 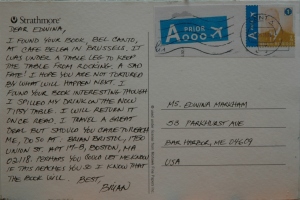 Though this challenge started in January, I am jumping in a month late.  The country serving as inspiration for this weeks postcard is Belgium.  My brother and sister-in-law lived there for two years in Brussels.  I remember them talking about moules et frites.  As well, they brought back Chimay for us.  Soooo, I immediately thought of including those on my postcard.  I started with an antique map and finished with a quote from a song – can you place it?  Here is this, my first installment.  We begin with Brian who is in Brussels. 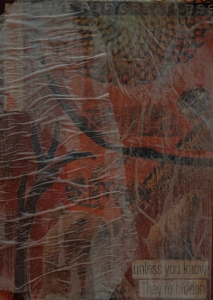 Today I wanted to put together a miniature collage postcard.  The thing is – I just wanted to have fun.  I didn’t want to think hard about it.  I didn’t want to worry about if the words made sense or the images fit together.  I just wanted to cut and paste and let what happens, happen.  This piece is the result.  I started by taking a colored piece of a page from a National Geographic and gluing it down.  Then I found some words that intrigued me and glued those down.  They were followed by pictures of bears (why? who knows!) and then a tree shape.  I glued some words down and pulled them away leaving lettered shadows.  Ultimately I gave it a wash of walnut ink.  In the end it didn’t seem cohesive (what a shocker!) so I placed pieces of tracing paper over the surface.  I actually like the end result.  I think it has a rather asian feel to it though I can’t say why.  Sure, I should be working on Emerging Cosmos, but I needed some time to decide what’s next.  This just kept the creative juices flowing!

This is the newest miniature that I created this week.  I put a nice, icy blue as a base and waited overnight for it to dry.  This morning I spread some glass bead medium over the surface and then etched in it with a sharp point.  Once it was dry I loved the way it looked, but the design was hard to see.  I decided what it needed was a wash of a darker color to bring out the pattern in the glass bead medium.  I like how it looks now but the watercolor wash took the shiny brilliance away from the medium.  I think the final step will be to put a glossy top coat over the surface.  Though I took this with my flash attached it looks rather dark.  I’m not sure it was working properly!  Enjoy! 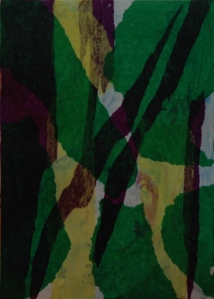 This miniature collage started in one place and ended in another.  Another example of my art telling where it needs to go!  I began by applying a thick layer of gesso to a large postcard.  Once it was dry I drew designs on it with a water-soluble crayon and softened it with water.  Today began using watercolor to add detail to the surface.  But unfortunately I ended up with what looked like a face, and an unhappy one at that.  So, I had some tissue paper close at hand and began applying it in small pieces.  As I went along the pieces grew larger and the result much more compelling.  I love the color blocks in this and the way you can see through the layers.  It was a good start to my day and though I would love to move onto my large canvas  right now the grocery store beckons.  Ugh! 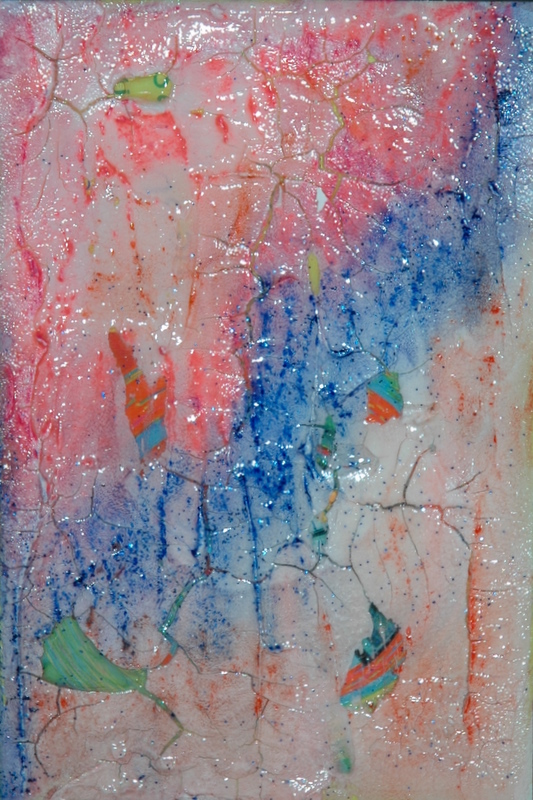 Okay, I just couldn’t resist putting this image in at full size.  It has so much more impact that way.  It may not be the most beautiful postcard I’ve made, but I like the colors and the way I created it was so much fun that I wanted to share it.  I started with a postcard, as usual, that had bright pretty colors.  When I started I didn’t expect to ever see those colors.  I took crackle medium and covered the surface of the postcard.  There were a few small gaps, where I didn’t do a perfect job with my palette knife, but I kind of liked them and opted not to fill them.  I let it dry and came back the next morning.  It had crackled like crazy.  I started using a water soluble crayon to add color and then applied water with a brush.  As I was doing this parts of the surface cracked right off.  Oops!  I didn’t mind but I know that this card wouldn’t last without an “intervention”!  Inspiration struck.  I grabbed some self-leveling clear medium that I had bought.  I poured some onto the surface and spread it out.  Voila!  It is now completely sealed and has a lovely glossy finish.  I liked the result so much that I just put crackle on another postcard to take another stab at this new game.  Happy Monday!

p.s.  I wrote about YOU, my fun blogging friends, in my other blog.  If you’re a wee bit curious about what I had to say, you can check it out here…

Amy McDonald at http://butterscape.blogspot.com/ has started a story that is being told in installments.  You can sign up at her site to write and she will assign you a week.  It was my turn this week to continue the story of the red-haired girl and her horse Peg.  To see the full story click here: http://butterscape.blogspot.com/p/onceuponatime.html.  Illustrations are optional and I took my best shot at creating some to go along with my story line.  They are done in Caran D’Ache pencils.

Suddenly the girl with the red hair saw a bus coming towards her through the swirling maelstrom.  This seemed incredibly odd but it was the diversion that she needed.  Though the wind and debris kept trying to carry her away from the bus it loomed closer and closer and she fought to reach it.  Finally it swerved up beside her and the door wrenched open.

She was shocked when she set eyes on the driver.  She appeared to be staring at herself, which she knew had to be completely impossible.  And yet, in a voice she recognized as her very own the driver said, “There is powerful magic afoot, come inside quickly and I will give you aid.”  Dazed and confused by the ever-changing circumstances in which she found herself, the red-haired girl boarded the bus.  She hoped that trusting herself was the right choice, but she had few options!

The red-haired girl pondered the fact that Mr. Panda had not become a demon and had appeared to be trying to give her advice that would help them all.  She began to wonder if he had also been under the enchantment from which she had helped set them all free.  But he had warned her of sea turtles and cups of tea and she couldn’t determine how that fit into the puzzle in which she was enmeshed.  She had to reach the mirror and put the pieces back.  Her best guess was that was how to stop the demon woman.

As she reached this conclusion the bus lurched to a stop and the red-haired girl locked eyes with herself.  The driver said, “The mirror shards are right outside but Peg and the demon, Mrs. Goldwater, are approaching quickly. You’ll have to work fast to put the mirror back together!”  The red-haired girl leapt from the bus and began to gather the shards glimpsing Peg looming ever closer.

She knelt with the mirror and the shards and fit them back into place as best she could.  While it was not perfect, she could see her own crooked reflection and had to hope it would be good enough.  She was startled by a whinny from Peg, who was clearly right behind her.  She whirled, mirror turned outward to face Mrs. Goldwater, or the demon that she had become.  Mrs. Goldwater looked furious as she moved toward the red-haired girl not immediately noticing the mirror.  When she saw the mirror it was too late, and she looked into her own twisted reflection.  Instantly she turned from flesh and bone to a dark shadow and began to drift back to the sky.  At the same time the wonderful, red bus, with her other self, and the maelstrom evaporated to expose a beautiful countryside.  Peg, intensely weary, came to her side and nuzzled her neck.  Mr. Panda was nowhere to be seen. 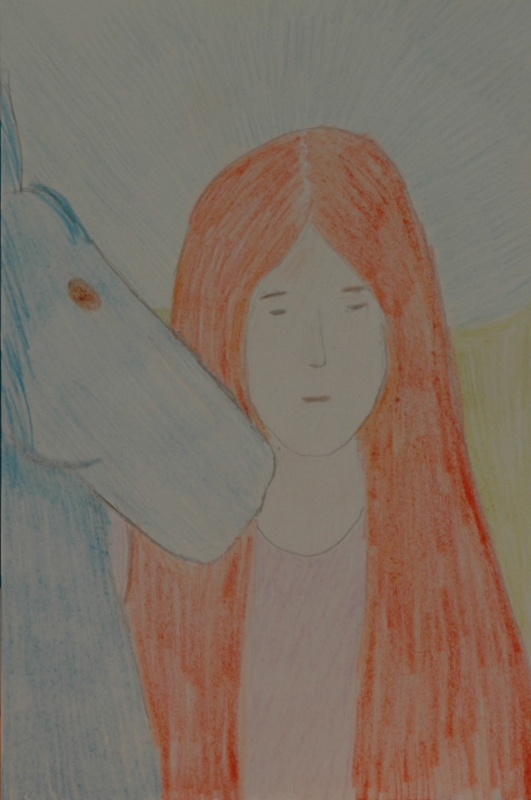 When the red-haired girl held the mirror towards Mrs. Goldwater she made a wondrous discovery.  There was a map drawn on the back of the mirror.  It showed rolling hills edged by a sharp string of mountains.  Past the mountains was a lovely blue sea.  She believed that was where the two of them were meant to go.  Their fate seemed tied to the sea and the sea turtles and mermaids of which she had dreamed.  Always frightened that the man in black might close behind, she mounted the tired Peg and set off towards the mountains that she could just make out in the distance.  Though flying might be faster, Peg was not strong enough for that after what they had been through.  They merely plodded off in the direction of the mountains, sorely tired but happy to be together once again.

All work in this blog is copyrighted unless otherwise noted. Please contact for usage permissions. Thank you.

Kathleen Hendrick
Create a free website or blog at WordPress.com.