I remembered that I had been playing with tags a while back.  They are small and easy to tuck away.  Hence it took me some time to find these!  I love the way they look together against the black background.  I think I need to keep building a stash of these little gems and then create some interesting larger whole from them.  For now, enjoy the rainbow! 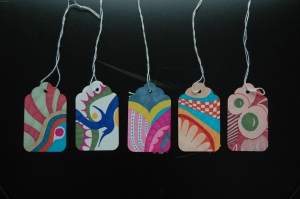 This is the newest miniature that I put together.  I used small tags that I had colored with Sharpie markers.  I applied them to a postcard that I gessoed.  Not complicated but I love the bright colors.  I cropped it so the messy background didn’t show.  But I love the way the strings dangle so I included the uncropped one as well.  Happy Tuesday – it’s going to be a great week! 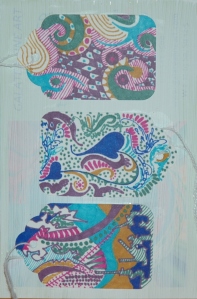 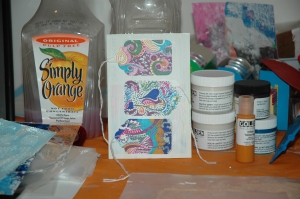 This is a miniature that I created before Thanksgiving.  However, with the holiday I just couldn’t manage to get it posted.  That and the fact that my husband was working at my desk!  I had applied a layer of black acrylic mixed with matte medium.  I liked it but it was dark.  Once it had dried I mixed a few bright colors on a piece of wax paper and then pressed/swirled it onto the surface.  I let that layer dry and then did some coloring over the textured surface with red, yellow and white crayons.  The last step was to apply a thin layer of glass bead medium.  I’m thinking I didn’t need that last step but I am happy with the result.  It looks like a mass of beautiful blooms to me.  What do you see? 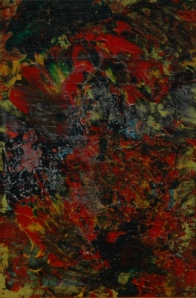 I just played to create this one.  I started with a thin layer of gesso.  I painted onto the ends with blue and orange watercolor and let the paint run towards the center.  I was a bit dull so I started peeling dried matte medium from my work table and gluing it down!  I liked the color and texture.  I accentuated it by painted over it and outlining parts of the shapes that were appearing.  I took some green acrylic and painted in the white areas as they were too stark.  I like the final result. 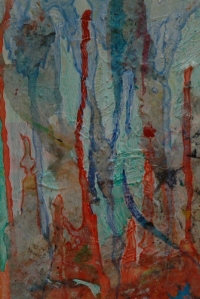 I have a book that I am altering.  On some of the pages I have randomly doodled in pencil or marker.  Today I decided to play with tape to create my miniature.  I was thumbing through my book to find something I might want to “pick” up with my tape.  When I saw my doodles I wondered if the color and design would come up as easily as the words.  The answer is yes.  I started with some colored pencil – but the card I was using as a base over powered the design.  I then tried some designs I had drawn in marker.  They came through beautifully.  I chose a few of them and transferred them to the card.  On one page I had been selecting words and boxing them.  The two phrases in this piece just called out to be added.  I can’t say why but I’m glad they are there.  And why not?! 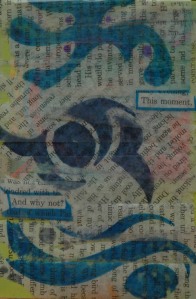 I continue creating, as Linda Halcomb calls them, my little jewels.  The ones today are each quite diverse from each other.  The odd title of this post relates to the first one pictured below.  I look thickened heavy gel medium and plopped 3 globs onto the postcard.  I tinted one with blue, one with green and one with yellow.  I swirled and moved the gel around until I liked the design and the colors melded a bit in the process.  At this point I thought I liked the colors.  Ah, but it was evening and in the morning light the colors didn’t look near so appealing.  So I coated the surface with a thin layer of icy blue.  Still I felt I needed to push on.  The next day I mixed some white acrylic, glass bead medium and a bit of gloss medium and applied that to the surface.  Voila!  I loved the result.  Somehow it looks architectural to me – like stucco perhaps?  At the same time I could also see swirling, foam-flecked surf.  What do you see? 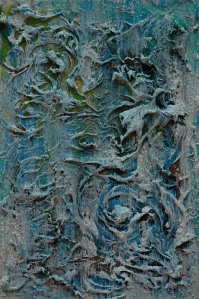 This next piece was another that stymied me.  It had layers of black acrylic, rice paper and pale green before I added some red.  Once it had dried I added a layer of heavy gel medium mixed with glass bead medium and red acrylic.  I etched a design into it and I thought it would show nicely once it dried.  Not so much!  So, I took some red mixed with a bit of gloss medium and lightly went over the surface trying to highlight the etched design.  It worked reasonably well. 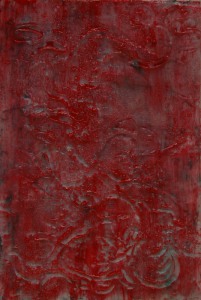 This one below is Man Versus Nature.  I can’t remember what the original image was.  I took a picture from a magazine and glued it down to a piece of canvas textured paper and pulled it off to leave color and texture behind.  I saved the magazine scrap as it looked interesting.  When I picked it up today I saw a manmade structure at night with reeds and grasses in the foreground.  I glued it to a postcard, colored in the grasses and also the structure.  I wish I had left the structure white, as it was, but there is no going back! 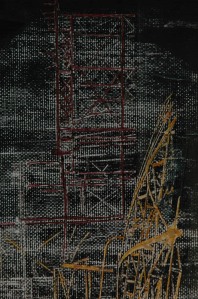 This last piece I just called Three for lack of a more original idea.  It was also a piece of magazine that I glued down and ripped off.  I put a thin wash of color over the areas where the color from the paper had been pulled off and thinned.  I ripped the shape out, and glued it over a postcard on which I had laid a base of color.  While I could have gone further I liked the look of it as is. 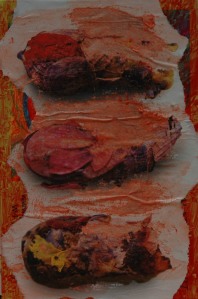 Here are a couple more miniature collages that I have created over the past week.  The name of this post is for the first miniature.  I took ordinary invisible tape and placed it over sections of poems in a discarded children’s book I got at a used book sale.  I have been using it to create an altered book.  As I pulled the tape away I captured bits and pieces of the poetry.  They were mostly poems about the outdoors.  I placed these snippets over an unused postcard that had very pretty colors.  I like the way that the colors show through and you can read bits and pieces of the poetry. 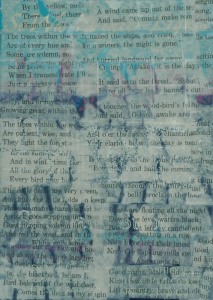 The next piece I call Red Dragon.  While it doesn’t actually have the shape of a dragon, it made me think of red Chinese dragons.  I took more of the semi congealed heavy gel medium and added red acrylic to it.  I placed a dollop of it onto a postcard and used a palette knife to manipulate it.  When it had dried I used white acrylic to paint around the edges and in some of the open areas. 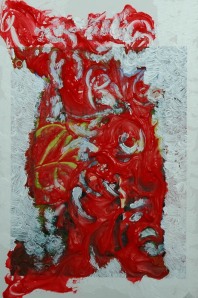 I feel I have been touched myself by the coming winter.  Perhaps only in my thoughts, but those thoughts have come to life in my postcards.  Each has a feel about them of winter or of Christmas.  Here are a few I created over the past couple of days… 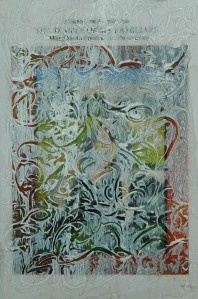 I have a jar of heavy gel medium that is partially dried out.  I used it on a number of collages to provide an interesting texture and 3-D effect.  For this one I merely laid a coat of it down and used a sharp instrument to draw lacy designs.  Once it had dried I took some white acrylic and brushed lightly over the surface to just highlight the etchings. 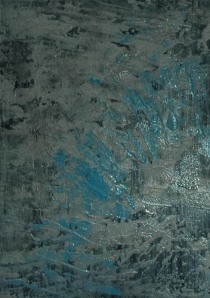 The picture of this one is on the dark side.  I used a lot of gloss medium which made getting an effective picture difficult due to reflection.  I painted on a black base coat over which I used a palette knife to lay down some white acrylic mixed with gloss medium.  I then added just a bit of wintry blue over the white, again, with a palette knife.  A frosty evening or a shimmery snowfall at night? 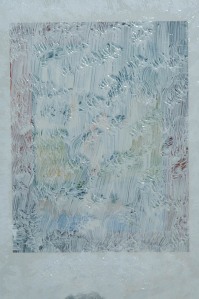 I probably should have kept going with this one but I just like it as it is – simple and delicate.  I just dabbed on white paint mixed with gloss medium.  It was supposed to be a base coat but I liked it too much to go any further…

They’re BAAAAAAACK!   Yes, I have started creating miniature collages again.  I had a nice long time off to get recharged and approach them anew.  I had stopped when they became a struggle and I felt I had exhausted possible ideas.  But, with the onset of cooler weather I am ready to explore these smaller art forms again.  Today I got three larger postcards started and I finished two smaller ones.   The pictures and descriptions follow… 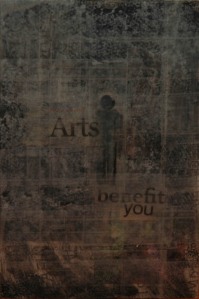 This collage started with a layer of black ink of an unused art exhibit card.  Over the black I dabbed a layer of white ink that left a lacy effect.  From there I applied layers of tape in grid patterns.  I put another layer of white ink over the tape, though it had little effect.  Lastly, I used tape to pick up the words and image of a person and placed them as the top layer.  As an artist I feel strongly that truer words cannot be spoken. 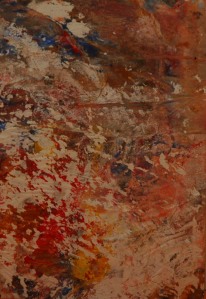 I placed a layer of white gesso over the face of a postcard to give me a blank base.  Onto that I applied a piece of wax paper that had been used in the creation of some other pieces of art.  I liked the color and design left behind on the paper.  Once I had put it together it brought to mind the colors of the dessert when cactus are in bloom.

All work in this blog is copyrighted unless otherwise noted. Please contact for usage permissions. Thank you.